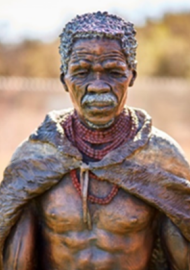 AUTSHUMAO (ǀAu-tsâma-ao) aka Arri (Herrie/Harry) was the founder of the proto-port of Cape Town. His original name like that of his first-born son was Arri, but because of his travels on the high sea he acquired the praise-name ǀAu-tsâma-ao (he who swims around with fish). Autshumao (the creolised version of his name) was born in circa 1610. He went to Java with the English in 1630 to train as an agent for English shipping. On returning to the Cape, he first established a trading and facilitation station on Robben Island with his followers. Whenever ships arrived, Autshumao dressed in European attire and boldly engaged with the ships’ captains. This earned Autshumao the title of ‘Governor’ from the English and French.

By 1638, he and his small trading-community of around 60 persons had re-established themselves on the mainland where the Camissa River entered the sea. Autshumao, with his extended family, were the cornerstone of the ‖Ammaqua trader community. The name ‖Ammaqua or Watermans was the name that Jan van Riebeeck said they used for themselves.

According to the Huygens register of VOC ships logbooks between 1600 – 1652, over 1072 Dutch ships rounded the Cape and 334 of these ships are verified as stopping at the Cape, each for an average of 24 days stayover, involving the visit of 54 110 crew and travelers. Only 34 VOC ships are recorded as definitely not stopping at the Cape with 704 VOC ships still under research. A further 432 ships from other European countries also travelled via Table Bay to India and Southeast Asia, of which 278 ships stopped off at the Cape, carrying 45 870 travelers who visited the Cape. Gaastra & Bruijn, maritime researchers at Leiden University in the Netherlands, provide the tables giving the numbers on board the ships for each decade between 1600 – 1652 which start with 111 per ship and increase over each decade to 200 per ship by 1650. Autshumao, and before him Xhore, and their communities of Khoe people, thus engaged far more Europeans and other nationalities over a half century, than the version that says only 42 European ships came to the Cape before Jan van Riebeeck and had minimal contact with the Khoe. Evidence also shows that a trading and proto-port relationship existed between this almost 100 000 visitation of Dutch, English, French, Portuguese and Danish travelers and the ship’s crews including Africans, Arabs and Asians. With much more research to be done on ships logs and records, the numbers could easily be double that which has so far been recorded. There were also two long term stayovers of 344 travelers on the shipwrecked Mauritius Eylandt in 1644 who stayed at Table Bay for 4 months and the 90 travelers on the shipwrecked Nieuwe Haerlem in 1647 who stayed over for almost 1 year. Jan van Riebeeck was thus not the first European to engage the Khoe, nor the first to start the port which had evolved as a proto port over some time. Jan van Riebeeck however was the founder of the Dutch Colony at the Cape of Good Hope.

In 1652, the Dutch, under Jan van Riebeeck, forced the Khoe to relocate and took over the strategic position next to the Camissa River where they built a fort. Between 1652 and 1658, Autshumao defiantly resisted Jan van Riebeeck in what was effectively a cold war, in which he achieved a degree of success.

In 1658, Autshumao was betrayed to the Dutch, given a summary semblance of a trial, had all his wealth in livestock expropriated and was sentenced to life imprisonment on Robben Island.

During the first Dutch-Khoe War, Autshumao escaped from imprisonment on Robben Island and regrouped the ǀǀAmmaqua- ‘Watermans’ among the Cochoqua near Saldanha Bay. Autshumao returned to the Peninsula as an independent farmer after the war, and as a spokesman for the Khoe. Jan van Riebeeck would not accept the protestations of the Khoe and announced that the VOC had taken their land by the sword. All the Khoe were banished from the Cape Peninsula with just 28 remaining as servants and labourers. Autshumao returned to livestock-farming and died in 1674. The map of Van der Stel’s journey to Namaqualand shows the ‖Ammaqua in the region near Saldanha Bay where they had taken refuge years before, after being hunted by van Riebeeck’s bounty-hunters during the first Dutch-Khoe War.

Read the full biography of Autshumao