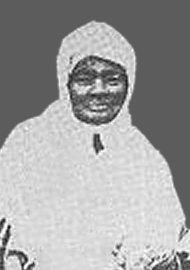 KATIE JACOBS is one of the few enslaved people who left us just a glimpse of her story in her own words. In 1910, at the age of 96, Jacobs shared some moments of her life in an interview with a journalist from the African People’s Organisation. Manisa was another former enslaved woman who left us a written account of her experiences through an article in the Cape Times in 1914.

Katie Jacobs was born around 1814 and died in the decade following the declaration of the Union of South Africa. At the time of her interview she lived in Hanover Street, District Six. Katie said she had been born on a farm near Kalabas Kraal to an enslaved Malagasy father and a Cape-born enslaved mother. As a child she was given to one of the slave-owner’s sons by the name of Kootjje and she and her father were separated from her mother who was given to one of the other sons far away in Franschhoek and thereby lost all contact with her mother.

At Kootje’s farm, in the first year of working under him, Katie had to work alongside men using a pick and shovel from sunrise to sunset to clear the wild land for farming. At night she worked in the kitchen. When not doing this, she had to herd cattle which was a lonely experience, and full of its own dangers for a woman. Katie describes cattle herding as the job she hated the most. To avoid sexual assault, she disguised herself as a male.

Although not legally married, Katie said that while working for Kootje she had a husband, Jacob, and had a first child who unfortunately died in infancy. Kootje’s wife was sickly so she became the foster mother to the firstborn son of the farmer’s wife and effectively became what was called a ‘House Slave.’ As such, she was made to sleep on the floor of the dining room, near the bedroom door, to be at hand when the baby wanted milk from her as the ‘wetnurse.’ She was required to refer to the baby as ‘young baas’ (young master).

Katie remembered Emancipation Day, 1st December 1834, by saying that: "One evening we were ordered to appear next morning in our best clothes and await further instructions. During the day we marched into the dining room, and without any previous warning, we were told by a magistrate that in four years we would be free.”

She recalls her father telling the magistrate that four years was a long time and that he did not think that the freedom promised would take so long. She said that the magistrate promised to speak to Ou Nooi (Queen Victoria) about a reduction, and on a further visit to the farm announced that a reduction of one year had been granted. This meant that the compulsory apprenticeship that all enslaved people had to undergo for four years before actually being freed, had been reduced for them in terms of their appeal. Katie said that “Nevertheless, my old father died in slavery, and so did not live to enjoy the God-given freedom which is the right of every human being.”

She said: "So, on the 1st December 1838, while performing my usual duties, I was startled by an angry voice demanding whether I was going with the speaker. On turning around, I recognised my husband in a violent passion. His baas was cruel, and sjamboked his slaves as often as he fed them. The farmer was mad with rage on the day of our emancipation. Early in the morning he armed himself with a gun, mounted a horse, and drove every ex-slave off his farm. At the boundary he warned them that the first one that was found trespassing on his land would be shot down.” "A soaking rain had fallen from daybreak, so that when Jacob reached me, he was drenched to the skin.”

Katie went on to say that “My master offered to take Jacob and me into his service at £1/10s and 10s a month respectively, and food and house. Jacob at first appeared determined to leave the district where he had suffered so much.” She says her “missus wept at the idea of my leaving her.” The farmer’s wife said that she must stay and implored: "Think of my son, whom you have suckled and nursed, and who has now grown so fond of you. What will become of him? No; you must stay; you cannot go!" Katie went on to say that, "Finally, my husband gave way, and we remained at the farm for three or four years.” Shortly after their liberation, Katie and Jacob were baptised and formally married. After 1842 they moved to a very different life in the city. The interview in 1910 gave her the opportunity to reflect on events that happened 73 years earlier.