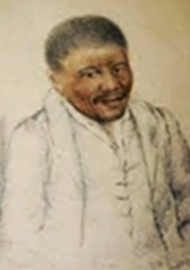 There are a number of versions of the origins of ADAM KOK I, but there are only a few verifiable clues to the origins of this founding father of the Griqua people, the first of a long line of men named Adam Kok. The verifiable facts tell us that the father of Adam Kok I, was a slave at the early European settlement at the Cape. Adam Kok II (picture on the left) made this statement about his great grandfather to Dr Andrew Smith in an interview in 1835. It is possible that the father of Adam Kok could have been emancipated and that Adam thus was born free. If not, Adam would have also been a slave and later manumitted.

Another version of Adam’s origins is based on a genealogical record suggesting that Adam Kok I, was born of a relationship between a VOC employee, Cornelius Jacobz, and a slave mother who gave him the name Adam because Jacobz believed the Cape to be the garden of Eden. It is speculated that the surname Kok came about as the result of Adam working as a chef, which is ‘kok’ in Dutch. Adam Kok I was also recorded as having led a life of servitude as a Free-black kneg (labourer) to a free-burgher by the name of Nicolaas Laubser until 1743 at the farm Selderyrivier. Adam then set off on his own, embracing the life of elephant hunting together with associates amongst the Xarixuriqua (Gariguriqua) Khoe clan who dwelt around the Piketberg district, using the proceeds from his hunting to acquire cattle and land.  At this time he is said to have been appointed as a Chief by an old Xarixuriqua Chief by the name of Koos Kleinman before Kleinman passed away. Adam began a lasting friendship with another Free-Black elephant hunter by the name of Klaas Barends and a lasting bond was developed between the Kok and Barends clans which came together to form what became known as the Bergenaar Basters, when Klaas married into the Kok family. It is a verifiable fact that Adam Kok I, who was recognised as a Free-Black burgher, acquired a loan farm and grazing rights from the VOC in 1751 for the farm Stinkfontein near Piketberg which he held until 1771 when his land was taken away and given to a European burgher. At the age of 61, Adam Kok I was forced to trek into the north-western interior with his large stock of cattle, extended family and followers.

Adam Kok and his followers moved through the Knersvlakte on to Kammieskroon and settled at Pella. Entwined with the dislocation of the Koks from the farm at Stinkwater were the beginnings of a longstanding feud that developed between the militant rebel Afrikaner family under Oude Ram Afrikaner, the progenitor of the Orlam Afrikaner clan of black Afrikaners, and the Kok and Barends clans. Adam Kok I found himself and his Xarixuriqua haven caught between a low key war between VOC officials led by a man by the name of Van Schoor, and the Orlam Afrikaners. Van Schoor was of the opinion that the Afrikaner family were instigating a rebellion against the white frontier trek boers in the district.

Van Schoor rounded up the rebel Khoe Afrikaner family and they were charged. But Oude Ram Afrikaner, who was dying, and Klaas were released. After Oude Ram’s death, Klaas Afrikaner and his sons Titus and Jager Afrikaner, moved into the same northwestern region that the Koks and Barends went to settle, and they built up their clan of Orlams Afrikaner horseback fighters which became notorious in South Africa’s wild west along the Gariep river.

With the threat of the militant Afrikaner clan out of the way, the trek-boers who were envious of Adam’s land and cattle began to move on the Kok settlement. A family of trek-boers, the Venters of Helpmakaar farm, raided the Kok settlement, shot and killed one of the herders, and made off with many cattle. As a Free-Black farmer, Adam petitioned the authorities for justice, but the petition fell on deaf ears at the Governor’s Office in Cape Town. Instead, the trek-boers ended up being given the Stinkwater farm.

It was at Stinkwater that Adam Kok gave leadership to the remnants of the Xarixuriqua (Gariguriqua) Khoena clan who dwelt in the district. He had married Donna, the daughter of the Xarixuriqua Chief. Adam also gave refuge at Stinkwater to Khoe youths fleeing enforced apprenticeships on white farms and to drosters. Soon a community developed on his farm and these people were forced to trek with Adam into the interior when he lost the farm. Adam moved up to the Kamiesberg in Little Namaqualand near the Kai !Gariep (Orange) River and was relatively settled by the time of his death in 1795.  When Adam Kok I died, he left his son Cornelius Kok I, and grandson Dam Kok (Adam Kok II) great wealth, with Cornelius Kok I presiding as Chief over the Baster clan. Cornelius Kok I was succeeded by Adam Kok II in 1805, who in turn was succeeded by Adam Kok III. Adam Kok II, taking counsel from the eccentric Rev John Campbell, addressed the Bergenaar Baster leadership at Klaarwater in 1813 about the derogatory meaning of the name ‘Basters’ (Bastaards). Through discussion with Dam and Barend they found an alternative name for their people - GRIQUA. Over a short period they created a Griqua constitution, a codified set of laws, a governing body and a judicial system, as well as a name for the settlement – Klaarwater became Griqua Town or Griquastad.