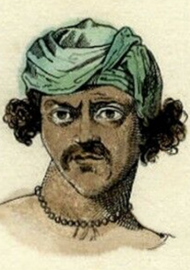 AMSOEBOE VAN TIMOR (also known as 'Paai Timor'), along with his wife, Inabe, and daughters, Iba and Baauw, were exiled to Mauritius from Jakarta by the United Dutch East India Company in 1676. In Mauritius, Paai Timor and his family were accused of conspiracy with enslaved people and convicts to engage in insurrection against the company including the massacre of officials. They were said to have been questioned in a pre-interrogation, under the orders of the Dutch Commander Isaac Johannes Lamotius, but peculiarly for such serious charges they were sent on to the Cape of Good Hope in 1679. Actual interrogation at that time was part of the judicial process which never took place.

At the Cape of Good Hope, the Timor family lived as Free Blacks and records show that they ran a brothel from their home. They were taken to task for this by none other than Simon van der Stel and the Council of Policy which authorised the fiscal to arrest any offenders found at the Timor household.

The fortunes of the Timor family in the Cape went from bad to worse. On 4 February 1708 the rotting corpse of town beggar, Amsoeboe van Timor aka "Pai Moor," was discovered in the Company gardens.

Their lineage is shared by many well-known personalities.