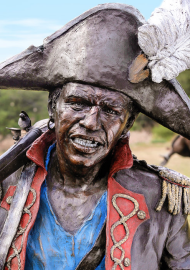 On 25 October 1808, a slave revolt took place at the Cape, remembered as the ‘Jij Rebellion’ led by the slaves LOUIS VAN MAURITIUS and Abraham van der Kaap.

As leader of the rebellion, Louis van Mauritius organised the revolt as a military campaign and wore a military style uniform. Over 326 slaves, including a few indentured Khoe labourers and two Irish sailors, participated in an organised revolt plotted at a Cape waterfront tavern in Strand Street. The campaign itself was launched from the Swartland farming wheat belt and began when a farm called Volgelgezang (Birdsong) was taken over and the farmer and family taken as prisoners. Subsequently, over 34 farms were visited by the rebels and at each farm the farmers and families were taken as prisoners and the slaves were freed.

The leader of this rebellion was a 30-year-old slave, Louis van Mauritius, who had first arrived at the Cape in 1781 as a 3-year-old child. He was sold from a passing ship to the Kirsten family. Louis was born in Port Louis, Isle de France known as Mauritius and thus as was custom in the naming of first generation imported slaves, he was called Louis van Mauritius. In 1800, the marriage of Willem Kirsten and Maria Catharina Grove ended in a judicial separation.

Louis became the property of Maria Grove and she then hired him out as a labourer so that she could earn an income. In a peculiar arrangement Louis was hired out at 12 Rixdollars per month to his own common-law wife, Anna, a free black woman. These were the circumstances when Louis and his fellow slave Abraham van der Kaap met two Irishmen, James Hooper and Michael Kelly in the waterfront tavern to plan the slave rebellion. In his trial, Louis testified to what he heard; “I had heard that in other countries all persons were free, and there were so many black people here who could also be free and that we ought to fight for our freedom.” Aware of the seriousness of his role, Louis acquired a Spanish naval uniform with ostrich plumes in his hat, complete with epaulettes. He also purchased two swords. He had saved enough money to hire two unsuspecting wagon hands and a wagon complete with six black horses and provisions for a few days.

The rebels had marched on 34 farms, increasing their numbers along the way, and took farmers and their families prisoner, and then marched on Cape Town. There the aim was to hoist the bloody (red) flag and fight until they were free. The slaves had no training or experience of waging battle and the endgame of their plan had little chance of success against a powerful force of the British Empire. But the slaves’ desire for freedom was greater than their fear of the obstacles they were up against.

At the rendezvous point in Salt River, the Dragoons, dispatched by Lord Caledon, attacked the rebel columns of slaves and the rebellion was put down. Historian Nigel Worden says the following in a newspaper feature article celebrating the 200th anniversary of the event in October 2008:

“It was an amazing feat of organisation, given the poor communications of the time, lack of any military experience, the long distances covered between town and countryside, difficult terrain, and the complexity of the plan itself. Added to this is the relative orderliness and discipline of the operation and the extent to which it had proceeded before it was checked, by the mounted, armed and most experienced military force of the times. For a small group of committed conspirators to have achieved this is quite phenomenal, given the context.”

Two separate punitive processes followed the end of the rebellion. Those slaves considered to be at the centre of the rebellion (51 of them) were tried in a Court of Justice, while the others (272 rebels) were tried under the military and handed over to their masters for punishment. Louis stood by his beliefs in explaining himself and argued in the trial that he kept discipline during the revolt. Abraham too made a statement which defined the revolt – addressing the slaves on the eve of the final push he said: “tomorrow when the bloody red flag of battle goes up and the fight for freedom is complete, you will be able to address your owners as Jij (you) and Sij (she).” Sixteen of the rebels were condemned to death by the Court. The Governor, Lord Caledon intervened to commute 11 of the death sentences. Louis, Hooper, Abraham van der Kaap, Jephta of Batavia and Cupido of Java were sentenced to hang for their leadership of the rebellion. 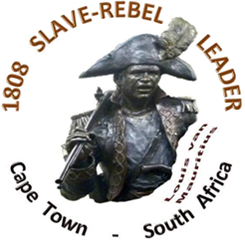