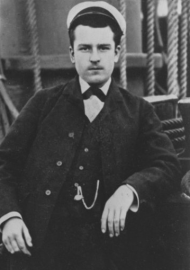 FELIX FLORES was born on Panay Island in the Philippines in 1844 and arrived in Cape Town in 1863. From a photograph of Felix on board a vessel it would seem that he arrived on the CSS Tuscaloosa. This was a vessel seized as spoils of war by the CSS Alabama and commissioned into the Confederate Navy of the rebel Confederacy during the American Civil War. The two ships had sailed down the Latin American coast and on to the Indonesian and Polynesian islands before arriving with much fanfare in Cape Town (“Daar Kom Die Alibama” is song still sung today) with some of the crew jumping ship and settling at Church Haven on the West Coast.

Felix would have boarded the ship as it passed through the Philippines where it took on extra crew. The Royal Navy at Simon's Town seized the CSS Tuscaloosa to return it to its rightful owners, while the CSS Alabama continued to France where, in French waters, a sea battle ensued with a Union ship and the Alabama was sunk. The Crew of the CSS Tuscaloosa were thus stuck in Cape Town for a while and this is when Felix fell in love with what would become his new home. He also spread the word to others in the Philippines.

Felix set up a shop in Kalk Bay and married the daughter of a German Count and a Mazbieker former slave. Their business supplied the arriving migrants from the Philippines with provisions, fishing gear and he organised accommodation too. Felix was the godfather of the community. The community spoke a mixture of Spanish, Tagalog and English and soon began speaking their own version of Afrikaans.

Felix Flores had four daughters and a son. One of the daughters, Franzina, married Christiaan Adams, a likely descendant of a slave and Passenger Indian, Free Black.

The Filipinos, nicknamed the Manilas, were exiles or refugees from Spanish repression in the Philippines. Over the troubled and extended revolutionary period between 1860 to 1880, they trickled into the Cape as word spread by the first Filipino, Felix Flores. By the time of the successful revolution led by the Katipunan and the La Liga Filipina, the Manila chapter of the Propaganda Movement and its rebel army, which saw the expulsion of Spain from the Philippines in the late 1890s, the Manillas of the Cape were well settled in their new home and their children were Capetonians. In the middle of the revolutionary period, the Labios Revolt and the Cavite Mutiny, in 1870 and 1872 respectively, saw a dramatic increase of Filipino exiles arriving in the Cape. By 1882 there were 68 Manila families in Kalk Bay. In 1898 the Primera Republica Filipina was established by Emilio Aguinaldo and a new Philippines Republican Army replaced Spanish military control.

Staunchly Catholic and imbued with revolutionary nationalist and anti-imperialist sentiments, many Filipinos had fled to England, Hong Kong, Japan and South Africa. The catalyst was the execution of three of their leaders – revolutionary priests Burgos, Gomez and Zamora during the Cavite Mutiny against the imposition of a new tax, led by resistance leader Sergeant Ferdinad la Madrid, against Governor General Rafael de Izquierdo. Amongst us today, throughout Cape Town, there are a host of Spanish surnames such as Fernandez, de la Cruz, Florez, Padua, Manuel, Pasqual, Garcia, Croza, Palma, Torrez, de la Varcia, Bonaventura and many more.

Together with an eccentric Spanish-speaking Irish Catholic priest, Fr Duignam, the Manilas built a Catholic Church at St James, by blasting rock for the purpose. Fr Duignam ensured 100% attendance at Holy Mass by a rather unusual means. He carried a sjambok which he called ‘Nagslang’ through which he ensured, with the blessing of his Manila congregation, that all youngsters in the community towed the line. Fr Duignam succeeded Felix as the uncrowned king of Kalk Bay. He died in 1931.