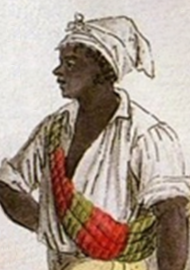 JACKIE JOIJ (Joy) VAN ANGOLAJ (aka Gratias Maialas) was born circa 1646 in Angola and was one of the large numbers of enslaved children to be landed at the Cape in 1658 aged around 13. Jacky was first owned at the Cape by Thomas Christoffel Müller and Jochum Elbertsz who trade him to Jan van Riebeeck. The Commander Jan van Riebeeck sold Jacky Joy to Roeloff de Man when the former left the Cape.

Jacky Joy was also recorded as Gratias Maialas van Angola and was one of the children on board a Portuguese slaver ship when captured by the Dutch ship Amersfoort in January 1658, off the coast of Angola. The Portuguese ship with 500 enslaved Angolans on board was captured after a day-long chase. There were 250 slaves that were taken aboard the Amersfoort while the rest of the enslaved and the surviving Portuguese crew on board the ravished vessel were left to sink. It then took two months for the Amersfoort to reach the Cape of Good Hope.

Seventy-six of the enslaved died along the way and 174 were landed at the Cape of which 125 would remain at the Cape, while the others were taken to Batavia. Jacky Joy Gratias (also written ‘Gracias’) Maialas van Angola was one of those survivors.

Jacky Joy was manumitted (freed) from slavery in May 1672 and he was baptised on 13 October 1679. Seven months later he married Zwarte Maria Evert the daughter of Evert van Guinea and Anna van Guinea. Maria Evert would go on to become one of the most wealthy and powerful women in the early Cape Colony by the time of her death in 1713. Records show that Jacky Joy could write, something that many Whites could not do in those days, and that would have been an asset to a businesswoman like Maria. But the marriage was short-lived when Jacky Joy accused Maria Evert of trying to poison him –  the couple were legally separated in July 1680.

There is no further traces of Jacky Joy in the records but the name Gracias coincidently appears as the name of a daughter born to Armozijn van der Kaap, another prominent freed slave woman who was in the same circle as Maria Evert. Manda Gracias was born around the time of the events that led to the separation between Maria Evert and Jacky Joy. It is thought that she may be Jacky Joy’s child. The couple were never formally divorced, not even when Maria Evert cohabited with Bastiaen Colijn and had four children with him at the height of her success.