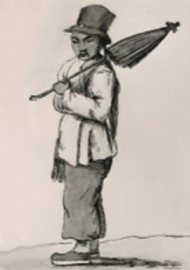 LIM INKO – ABRAHAM DE VEIJ – THE CHINAMAN, in terms of his document paper trail, was a man of many names. Some of these were Tuko, Junko, Neniko, Liniquo, Thin Heenko and Thimseengko. After 1702 he presented himself as Abraham de Veij (Fēi)– translated as Abraham (the Chinese) of Africa.

Lim Inko is thought to have been born circa 1665 -70 and was banished to the Cape in the 1690s from the City of Jayakarta (today Jakarta). The Dutch called Jayakarta, Batavia, a German name, that was the seat of power in Southeast Asia for the United Dutch East India Company (VOC).

The Chinese inhabitants of Jayakarta were known as Peranakan Chinese (Creoles who were many generations separated from China). In 1740 the Dutch massacred 10 000 Chinese inhabitants of Batavia in acts of genocide. The Dutch conflict with the Indonesian Chinese extended over the next few years throughout Java as the Chinese mounted a fierce resistance. During this period a number of Chinese people were exiled to the Cape of Good Hope or sent as convicted persons.

These Chinese and the enslaved of Java had roots that, as a result of enslavement and other migratory factors, extended to West Asia, Eurasia, South Asia, Southeast Asia and to the vast expanse of China with its many ethnicities. By the time of the Dutch Colony at the Cape, many Sino ethnicities lived in 25 countries in broad Asia and had an array of national identities and cultures.

Abraham’s status in the Cape was that of a Free Chinese aka Free Black. In 1702 he married Maria van Batavia after having a daughter with her the previous year. His daughter, Christina van der Veij, lived until 1790 and has many descendants in South Africa across the race silos of “Coloured’, ‘Black’, ’White’ and ‘Asian’. Abraham the Chinese of Africa had gotten permission to return to Batavia with his family in 1710 but passed away in 1712 before he was able to fulfill this dream.

At any one time over the first 150 years of the Cape Colony there were around 50 Chinese of various origins at the Cape. This included enslaved, imprisoned and Free-Chinese exiles banished to the Cape who were subject to great abuses, and European superstitions and prejudices regarding Chinese. After 1800 Chinese were among the first migrants from St Helena and continued to arrive in around four waves in the 19th century and another four in the 20th century. In the period 1900 to 1910, around 1 000 Chinese people were brought out to work as indentured labourers under slave-type conditions in the gold mines of Johannesburg. Over the last 370 years in South Africa, the Chinese footprint has been as consistent as that of Europeans and other Asians. As a result, many in South Africa have Chinese ancestors. China also has a much longer history of visitation to South African shores than Europeans, and trade between South Africa, Arabia, South Asia, China and Southeast Asia, can be traced back to 700 CE when Europe was still in the “dark ages.”

Chinese People in South Africa
Beyond the rainbow.
Chinese people have been coming to the country's shores for hundreds of years. Some of them have called South Africa home for generations. There are many mixed cultures, traditions and identities, but the Chinese community is making every effort to integrate into the wider society.
(Lindy Mtongana - CGTN Africa)
[05:29] CGTN Africa
Tributary 6: Exiles, Refugees & Convicted
Select one of the people of Tributary 6 to read more about them.