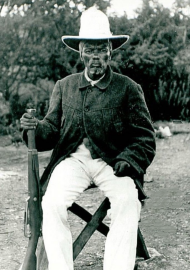 HENDRIK WITBOOI was the first African leader, a Gaob of the ǀKhowesin Nama people, who took up arms against German imperialism in defense of Namibian land and territorial integrity. Gaob Hendrik Witbooi was born circa 1830 in Pella, Northern Cape, in the Cape Colony.

His father was Gaob Moses Witbooi and his grandfather was Gaob David Witbooi who led the ǀKhowesin Nama from the Northern Cape into Namibia to join the Nama already there. Hendrik also was the nephew of Jonker Afrikaner of the Orlam Afrikaners who founded Windhoek city. Jonker Afrikaner was the son of Jager Afrikaner and of the long lineage that goes back to Oude Ram Afrikaner from Tulbagh in the Western Cape. The ǀKhowesin roots go back beyond the Northern Cape Nama to the refugee Peninsula Khoe at the Cape of Good Hope given sanctuary by the Nama after being put to flight by land seizures by the Dutch colonists.

Hendrik received a Lutheran missionary education through the German missionary Johannes Olp, and was well-versed in many languages, including his native Nama Khoekhoegowab. He was further educated at Rhenish Missionary and Wesleyan Methodist Schools in Namibia as well as at the Wilberforce Institute in Evaton, South Africa.

Hendrik took up employment as teacher in 1856 at Keetmanshoop, transferred in 1859 to Maltahöhe, and returned in 1865 to Gibeon. At the request of the community to build a church, on 16 May 1884 Witbooi moved north with a faction of the ǀKhowesin tribe. This move was against the wishes of his father, Moses, who remained opposed to Hendrik's plans. As evidenced from his diaries, Hendrik still admired his father greatly, in spite of their political difference. On 22 February 1887, Moses' chief rival, his subchief Paul Visser, had Moses killed and deposed.

Hendrik Witbooi held leadership at Gibeon in 1888, long after the death of Jonker Afrikaner in 1861 caused a power struggle among the various groups for paramount leadership. Ultimately, Hendrik defeated his last chief rival, Paul Visser, who had killed his father. In July 1888 Hendrik become chief of the ǀKhowesin people. He proceeded from this position to unite other Nama social groups under his control as well. By 1890, Hendrik Witbooi was signing all his letters, 'Chief of Great Namaqualand'. From 1893, he and the German occupiers of Namibia began to clash but entered into a treaty with the Germans whose focus had shifted to the Herero in September 1894.

In 1904 Hendrik Witbooi led a major revolt against the German occupation of Namibia. It was during this liberation war that Gaob Hendrik Witbooi was killed in action on 29 October 1905, near Vaalgras, near Koichas. His last words were: "It is enough. The children should now have rest." He was succeeded by Gaob Fransman Nama until the Nama surrendered in 1908. Gaob Hendrik Witbooi is one of nine national heroes of Namibia that were identified at the inauguration of the country's Heroes' Acre near Windhoek.