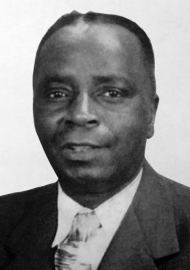 CLEMENTS KADALIE was born circa 1896 in Chifira village near the Bandawe mission station in Nyasaland (Malawi) and by 1912 was a trained teacher. From 1915 he became a migrant worker, first in Mozambique, then in Southern Rhodesia (Zimbabwe) and by 1918 in Cape Town. It is here that he met Arthur Batty, a social activist and trade unionist, and through this influence, started out on a political and trade union career. He started with Cape Town’s dockworkers, which included a number of Caribbean and African American sailors, turned dockworkers.

Kadalie founded the Industrial and Commercial Workers Union of Africa, with himself as Secretary, at a meeting of dockworkers in Cape Town in January 1919. Notably, Kadalie did not speak any local African language nor Afrikaans and had been in South Africa for less than a year. The same year he led a relatively successful strike of dockworkers and this raised his stature immediately. By 1921 the ICU, as the union was abbreviated, was a national union, and Kadalie was its elected General Secretary.

But Kadalie was an enigma. In 1924, he urged the still-enfranchised Africans – ‘Native’ and ‘Coloured’ to vote for the Afrikaner Nationalist Party of General J.M.B. Hertzog which was in alliance with the white Labour Party. Black people only had indirect representation since the black vote had to go to a white candidate. It was Kadalie’s fraternisation with white politicians and unionists that led him to believe that the white movement embraced rights for all workers. His misjudgment became apparent when, after their victory, the white Nationalist-Labour Party pact government supported a “civilised labour policy,’ which was racist segregation by another name. Belatedly Kadalie became a critic of his former white patrons. He shifted the ICU headquarters to Johannesburg in 1926 and paid more attention to the Orange Free State and Natal. The ICU reached the peak of its support in 1927, with over 100 000 members, but it was also the beginning of a rapid descent in fortunes after he clashed with his growing Communist Party support base. Initially he was happy with the support of the communists but reacted aggressively in purging CPSA members when he realized that they challenged his mafia-like stranglehold on the union, as with the other leading figure, George Champion in Natal. Kadalie had not learnt the lesson of 1924, regarding his closeness to those white advisers he perceived to be liberal friends. He also relied heavily on a trade union adviser, William Ballinger, from the British Labour Movement. He just did not grasp that his advisors’ first interest was the so-called civilised white worker. 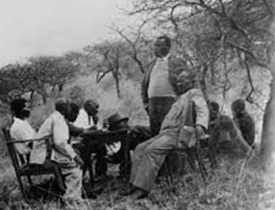 At the same time, in 1928, the large ICU branches in Natal and the Orange Free State seceded. It was downhill from then on. Kadalie resigned and establish an independent small ICU branch in East London where, as a result of a strike that he organized, he spent two months in prison. Resigning, and then unsuccessfully returning as national secretary in early 1929, Kadalie failed to stem the accelerating collapse of the national ICU. Kadalie never recovered from the demise of his ICU.

Over the years he also integrated into the community labelled ‘Coloured’ and was respected for his historical contribution towards the birthing of the trade union movement in South Africa. The ICU had given birth to a number of excellent trade unionists and political activists. Two of these were Johnny Gomas and Jimmy la Guma, who were also great Camissa African political activists holding positions in the ANC and the SACP, and were founders of the first national liberation movement in 1935, called the National Liberation League.

Clements Kadalie remained a respected community leader in East London where he died in 1951.