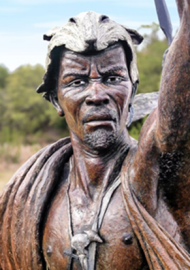 DAVID STUURMAN and his brothers were resistance leaders of the Gamtoos clan of the Gonaqua Khoe who operated in a confederal relationship with the Gqunukhwebe, which in turn paid tribute to the Rharhabe Xhosa.

The Stuurman name emerged as the strongest anti-colonial voice at the turn of the 18th and 19th century with the brothers Klaas, David, Bootsman and Andries at the head of Khoe resistance. Stuurman, Hans Trompetter and Boezak were Bi’a (heads, gaob’s or kapteins). Of these, Klaas Stuurman was the Kai Bi’a (the chief leader). Klaas Stuurman had opportunity to speak to General Vandeleur in 1799 and said:

“Restore the country of which our fathers were despoiled by the Dutch and we have nothing more to ask. We have lived very contentedly before these Dutch plunderers molested us, and why should we not do so again if left to ourselves? Has not the Groot Baas (God) given plenty of grass roots, and berries and grasshoppers for our use; and, till the Dutch destroyed them, an abundance of wild animals to hunt? And will they not return and multiply when these destroyers are gone?”

When Klaas died, David Stuurman became the Kai Bi’a or leading Gaob of the Gamtoos Gonaqua. David’s lands provided refuge to Khoe labourers abused by white farmers and to those Khoe who refused to be subjugated and resisted conscription into commandos. David Stuurman became a major thorn in the Governor’s side as he opposed the Hottentot Proclamation of 1809 which curtailed the Khoe on many counts.

Stuurman was captured, had his land seized and was imprisoned on Robben Island, but within months he became the second person (after Autshumao) to escape the island prison. Stuurman then allied with Makhanda who was married to the sister of Gamtoos-Gonaqua Bi’a Hans Trompetter.

Makhanda, David Stuurman and Hans Trompetter were taken as prisoners of war by the British and incarcerated on Robben Island. In 1819 the three men were part of an Island armed rebellion which led to the escape of 30 prisoners on three whaler boats. Two of the boats, including that of Makhanda, David and Hans, capsized in the rough breakers. Though most perished, including Makhanda, David had successfully escaped Robben Island a second time. He was later captured and exiled as a prisoner to Sydney in Australia where he died.