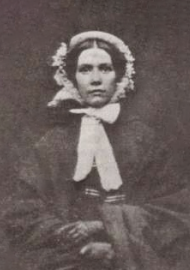 JANET BURNSIDE SOGA was born in 1827 in Hutchesontown, Glasgow. She was the eldest daughter of Alan Burnside and Isabelle Kirkland, both workers in the weaving industry, who lived in poverty in the Salt Market slum area of Glasgow.

The Burnside family were members of the United Presbyterian Church College and Tiyo Soga was studying to be a Presbyterian minister. Tiyo Soga and Janet were married by Rev John Kerr at Ibroxholme, Glasgow on 27 February 1857 and the couple left for the Cape in 1857, arriving in Port Elizabeth after three months at sea. There they established a mission at Mgwali and lived under poor conditions while raising money and building a church. Tiyo and Janet had eight children who all grew up to be remarkable achievers.

Janet lived a difficult life as a rural African preacher’s wife. But she never complained and immersed herself in Xhosa culture. The family moved to a new mission station at Tutura in the Transkei. Here Tiyo Soga died on 12 August 1871. Janet Soga then went to live with her aged mother Nosutu in Emgwali to ensure that their children all became proficient in Xhosa. Janet thereafter took the children to Scotland for higher education and died there in Glasgow in 1903.

Three of the four Soga sons married Scottish women and the fourth, Allan, married back in the Cape to a local woman. The eldest son, William Anderson Soga born 1858, qualified as a medical doctor at Glasgow University. He returned to South Africa and established Miller Mission in Bomvanaland, where he served as a medical missionary until 1903 before going into private practice. John Henderson Soga born 1860, established a mission at Mbonda, near Mount Frere. He was an accomplished author on Xhosa culture. Allan Kirkland Soga born 1861, studied Law and Humanities at Glasgow University and on his return to South Africa was an assistant resident magistrate in the Transkei and later a newspaper editor. Jotello Festiri Soga born in 1865 trained at the Royal Veterinary College in Edinburgh and became the first ever South African to qualify as a veterinary surgeon. On his return to the Cape he collaborated with David Hutcheon to find a solution to the rinderpest. He was a founder member of the Cape Veterinary Association. Their sister Isabella McFarlane born in 1864 died at Cunningham Mission, Toleni, Transkei in 1884. Frances Maria Anna born 1868 worked for the church and was secretary of the Girls Association and the Women’s Manyano. She died in Elliotdale in 1942. Jessie Margaret born 1870 qualified as a music teacher and taught music in Glasgow where she passed away at the age of 83.

This was the house that Janet Burnside Soga built. She outlived her husband by 32 years raising their children single handedly. Tiyo Soga (1829 – 12 August 1871) was a journalist, minister, translator, missionary evangelist, and composer of hymns. Soga was the first black South African to be ordained and worked to translate the Bible and John Bunyan's classic work Pilgrim's Progress into his native Xhosa language.