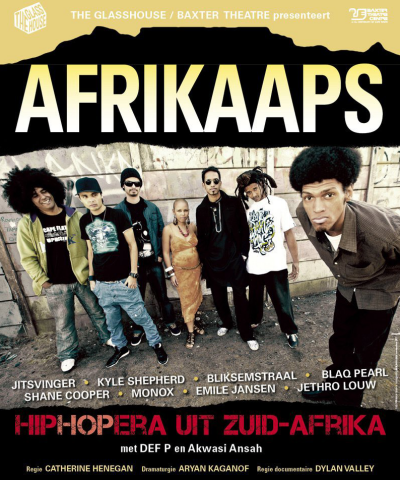 In the process of people from 195 roots of origin coming together, local San, Khoe, Xhosa, Sotho, and Tswana peoples, integrated with enslaved Africans from elsewhere on the continent, enslaved Indians, Southeast Asian enslaved, and Chinese enslaved and banished peoples and worked under the yoke of Dutch, French, German, Portuguese, Scandinavian, Swiss and British colonials. This presented a tower of Babel scenario.

People needed to understand each other, and this need led to a merging of elements of a number of languages. The early core language used by the Europeans at the Cape who were mainly Germans, Dutch and Scandinavians was a low-class Dutch sailor’s slang and into this came the interaction with the Kora language of the Khoe. In turn this blended together with the languages of Sri Lanka, India, Bengal, Myanmar, and Siam, followed by Meleyu which in various forms was spoken across the Indonesian Archipelago, as well as other languages like Buginese from Sulawesi, right through to Chinese in its various forms. Into this mix came a range of West and East African languages and Malagasy too.

As the colony expanded into the territories of the San and the Xhosa, Sotho and Tswana, this emergent creole language that Europeans called “Hotnotstaal” (Khoe-language) adopted more and more African words and the African languages in turn borrowed words from it too. It is this creolised language that came to be called Afrikaans. 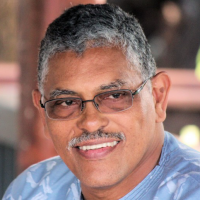 The term ‘Afrika’ and its application to people - ‘Afrikaner’ or ‘Van Afrika’ was first used as a terms of self-identity by the mixed communities of third-generation enslaved who integrated with Khoe people who had been dispossessed of their land and forced to become farm-labourers for the Europeans. One of the first new proto-national groups that emerged were the Orlam Afrikaners descended from Oude Ram Afrikaner, circa 1690, and from who a dynasty of leaders arose and who still exist today, mainly in Namibia. Jonker Afrikaner was the founder of Windhoek, the capital city of Namibia.

The first written Afrikaans was to be found in texts used in Madrassa classes in the Muslim community of the Cape, using Jawi/Arabic script. 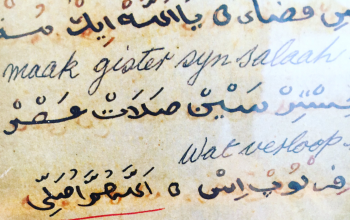 However, an emergent nationalist movement among the Boer descendants of the Dutch and French, in the 1870s began calling themselves ‘Afrikaners’ (Africans) and saying that Afrikaans was the name of their language. They did so in defiance of other Boers who derided them for appropriating ‘Hotnotstaal’ and the identity of the ‘Hotnots’ (Hottentot and Hotnot are derogatory terms that were used to refer to Khoe people). To distinguish themselves and underline that they had first rights to being Afrikaners and having Afrikaans as their language, the leaders of this movement called themselves the Association of True Afrikaners (Genootskap van Regte Afrikaners) and went on to codify the language and develop a white Afrikaans language framework (sometimes referred to as ‘suiwer-Afrikaans). Part of this appropriation process was also the co-option by Christian missionaries of the Afrikaans language for purposes of proselytising.

This however was not successful in bridling the Afrikaans language used in black communities, particularly among Camissa Africans – those classified as ‘Coloured’. The Boers carried out some purging of the creole language of many non-European words and expressions even though they could not do so successfully. Among the descendants of the Khoe and the African-Asian enslaved over time the language evolved in a different and more dynamic manner than the white language. People began to talk on the Cape Flats of speaking "Kaaps" and in the young generation post 1994 the language became known as Afrikaaps. 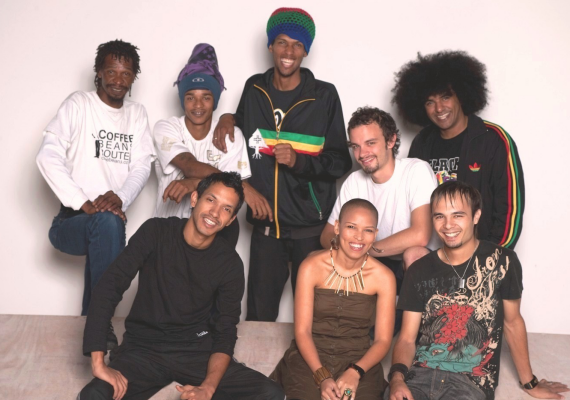 In 2009 a group of talented young musicians and performers who had come to an awareness about this hidden history of Afrikaans and wanted to learn more and share what they had learnt with young people on the Cape Flats, decided to put on a multi-media show called "Afrikaaps". It took the unique form of a multi-media protest-theatre production promoting an understanding of Afrikaaps as a legitimate Cape Afrikaans dialect that was directly rooted in the black originators of the language. It was an act of restorative just and reclamation born out of an exercise in restorative memory. 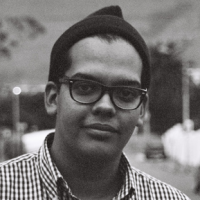 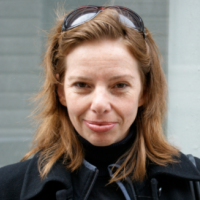 Filmmaker Dylan Valley became the film scribe of this historic awakening, recording not only the performances, but also the thoughts of the performers and the activities involved in the making of the show, as well as the impacts on its audiences, youth in particular. Dylan’s film product was as powerful as the show and  it opened up a new process of archiving history in the making. The show broke new ground as it opened up or pioneered discourse at grassroots level about colonialism and neo-colonialism. 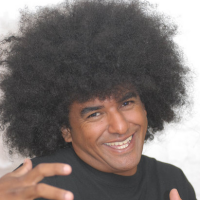 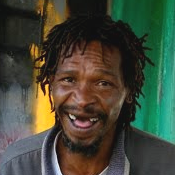 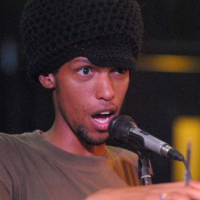 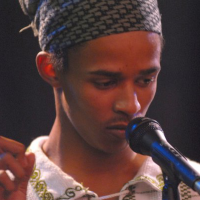 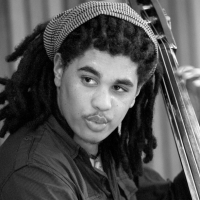 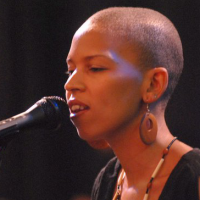 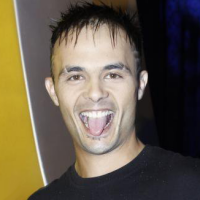 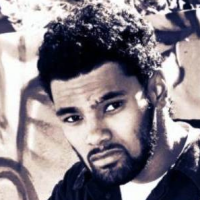 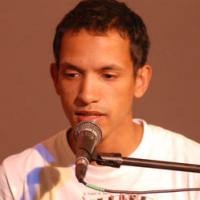 The show was unique in another way in that it brought in older generation heritage activists who had done ground-breaking academic research and were well known as liberation movement veterans – Dr Neville Alexander and Patric Tariq Mellet. Not only did they work behind the scenes with the performance team but they also, with the help of multi-media technology, were brought into the performance as projected participants getting into conversation with the audiences.

Afrikaaps - The Documentary
Dylan Valley - Plexis Films 2010.
This documentary focuses on a theatre piece entitled "Afrikaaps" within a film. It is based on the creative processes and performances of the stage production. Using hip-hop the film and the stage play attempt to reclaim Afrikaans – so long considered a language of the oppressor – as a language of liberation. Present from the beginning of the project, Dylan Valley captures revealing moments of the cast's and production crew's personal narratives that transcend what happens on stage.
[52:22] Plexis Films/The Glasshouse Production
Culture Unplugged

Read more about Dylan Valley and the views of the cast of Afrikaaps. 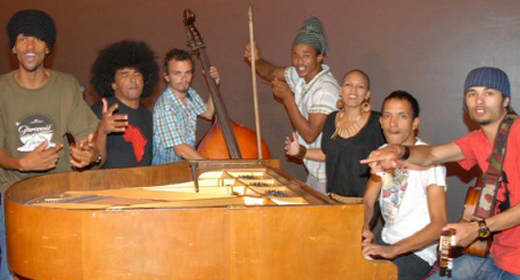 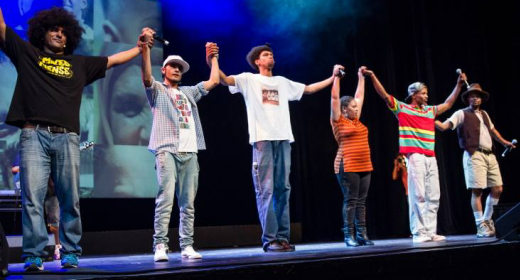 Curtain call for the Afrikaaps cast 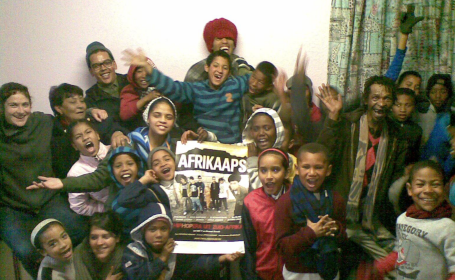 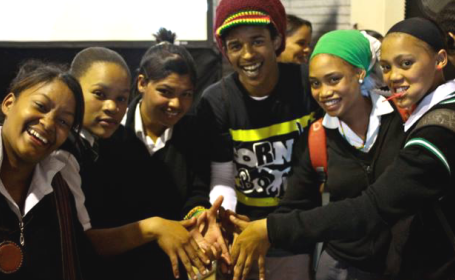 Community interaction and awareness with the Afrikaaps cast members