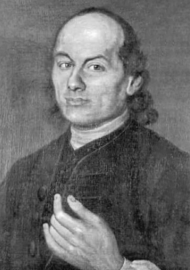 GEORGE SCHMIDT was born in Kunewalde in Germany in 1709 as the son of a peasant family. He was converted to Christianity at the age of 16. In 1726, Schmidt set off on foot for Herrnhut in Saxony and started preparing to become an evangelist with the newly constituted Moravian Church. On his first evangelistic mission in 1728, he was sent to Bohemia and was incarcerated for six years for addressing private meetings which violated the Roman Catholic law in that country.

In 1736, two years after his release, he received a letter from two clergymen in the Netherlands. They asked for volunteers to go out to the Cape as missionaries to the “Hottentots” (Khoe).

Schmidt proceeded to Amsterdam and sailed for South Africa in December 1736, arriving in Table Bay in July 1737. Within two months this relatively young man, imbued with missionary zeal, made his way to the Riviersonderend and later moved to Baviaans Kloof where he established the first mission station in Southern Africa. At this mission, he brought the evangelical message of the Dutch Bible to the Khoe along with reading and writing, planting and nurturing vegetable gardens for their own sustenance.

All of this was seen as threatening to the European settlers and even heretical which made George Schmidt an enemy. The local Dutch Reformed Church was opposed to Schmidt from the start and accused him of stealing White farmers from their church. The Khoe themselves were not too interested in the Christian message but were accepting of Schmidt and those things that enhanced their lives. Otto Mentzel, considered an important historical at the time, did not hide his hostility to Schmidt describing him as a "hypocrite... sham" and "fraud".

After having baptised his first converts in about 1742, Schmidt faced criticism from some clergymen back in the Netherlands who were of the opinion that only Reformed ministers could baptise. They also regarded him as not having been properly ordained. This of course had all been whipped up by the European settlers who had murdered, raped, pillaged, seized and impoverished the Khoe who they considered more beast than human. This sentiment found fertile ground in the hostility shown in Europe to the Moravians who were considered to be a questionable sect at the time.

Slanderous rumours began circulating at the Cape regarding Schmidt's alleged immoral behaviour with the Khoe women living at the mission. There was no confirmation of these rumours even though at the time it was quite common practice for single European men to cohabitate with and marry enslaved women and indigenous women.

Consequently, Schmidt was suspended from being a missionary and forced to leave the Cape in 1744. He fully intended to return after pleading his cause in Amsterdam, but he never obtained the permission he had hoped for and never returned to the Cape. Missionary activity aimed at indigenous Africans was stopped in its tracks until the 1790s when the European settlers saw a new value in using missions and Christianity as a necessary part of pacifying Black people. The Moravians were invited back, along with other missionary organisations, to carry out a civilisation mission. George Schmidt died in 1785, some five years after this new missionary activity was introduced at the Cape.