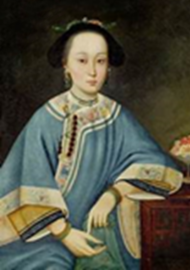 Many South African names are anglicised Chinese names – Jardine, Fortune, Whiteley, Hoption, Chapson, Yenson and Kolling to name just a few. Under Apartheid, unlike in the case of the Japanese who were afforded the peculiar status of ‘honorary white’, persons of Chinese heritage were classified as ‘Coloured’ and suffered many indignities. THISGINGNIO VAN CERIBON, was a Peranakan (Creole) Chinese woman exiled or convicted to the Cape from the Indonesian Island of Java. History at the Cape was highly influenced by unfolding events in Dutch Java but particularly around the genocide that occurred in Batavia (Jakarta) in 1740 that coincides with Thisgingnio’s exile to the Cape. Over 10 000 Peranakan Chinese in Java lost their lives in that massacre.

On 9 April 1747 the VOC ship Standvastigheid arrived in Table Bay with a number of captives on board. It had come from Batavia. Few of the captives had survived the treacherous journey, but amongst the survivors there was a Chinese lady who stood out amongst the captives. She was an exile and prisoner and there are no records that remain as to what her crime had been. She was registered as Thisgingnio van Ceribon. Ceribon is on the north coast of Java. Thisgingnio was sent to the Slave Lodge as a convict for ten years even though she was not a slave. In 1757 she was released from the confines of the Slave Lodge to lead a free life until her death in 1763. Her release from the Slave Lodge was by a rather unusual decree of the Governor and she subsequently settled into the small group of Chinese exiles at the Cape regarded as Free Blacks. Researcher-writer of her story, James Armstrong, suggests that there was more importance to this woman than meets the eye. An air of mystery surrounds her. 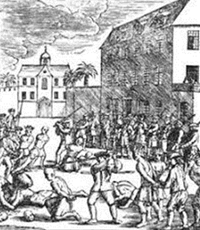 Depiction of the 1740 Batavia massacre

Thisgingnio made a new life for herself with a fellow Chinese exiled from Batavia, by the name of Ongkonko. It was a short period of brightness in her life, he died because three years later. Thisgingnio was dealt a heavy blow by Ongkonko’s death which affected her deeply. She pined for Ongkonko and literally drank herself to death over the next three years. Ongkonko had also arrived in the Cape in 1747 on the ship Nieuwstadt. Ongkonko was well connected in Batavia where his brother-in-law was a Chinese Captain in the service of the VOC. Ongkonko had been sentenced for treason in Batavia and sent into exile at the Cape, but he kept contact with his sister, Insaaf, in Batavia.

She died in 1763 when she never awoke from an alcohol binge and was found slumped over her drink by her lodger, the revered Sayeed Alawie. Alawie, originally from Mocca in Yemen, had arrived at the Cape from Batavia as a prisoner. He had been the advisor to the royal court of the Sushunan, the ruler of Java, before being seized and exiled by the Dutch, who considered him a troublemaker.  After his release at the Cape, he became a policeman who had access to the Slave Lodge where he spread the message of Islam. Tuan Alawie died in 1803 and is buried at the Tana Baru in the Bokaap. He tried  unsuccessfully to win Thisgingnio over to Islam and to give up drinking.

Thisgingnio and Ongkonko ran a restaurant business. When he died, Ongkonko left a sizeable will, including houses, cash, the business and movable property. Only his sister in Batavia and Thisgingnio were beneficiaries of his will. Another Chinese man, Poasinko, who had been the executor of Ongkonko’s will, assumed responsibility for burying Thisgingnio when she died. Because of Onkonko’s connections it may well have been he who had used his connections to ensure that Thisgingnio was released from the Slave Lodge. Researcher Armstrong writes about the disposal of her estate and says that much of what she had was bequeathed to her by Ongkonko. Amongst those present at the sale of her belongings was a group of Chinese buyers and creditors. These were Poasinko, Locko, Dominko, Quansink and Ontingo. Their presence and the nature of the goods on sale provides a small window into the Chinese ancestors among Camissa Africans, whose histories are generally hidden.