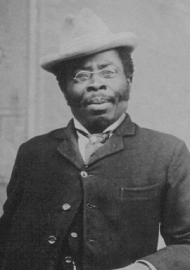 FRANCIS ZACHARIUS SANTIAGO PEREGRINO was born in 1851 in Accra, Ghana. His mother had been an enslaved African in Brazil who had made her way back to Ghana. Francis married an American woman, Ellen Sophia Williams, in 1876, and moved to England. Ten years later they relocated to Pittsburgh, Pennsylvania in the USA. By 1896, he was living in Buffalo, New York where he published a weekly newspaper for black readers - the Buffalo Spectator, and later the Albany Spectator.

Influenced by Booker T. Washington and W.E.B. DuBois, Peregrino entered the political world that would lead to the foundation of the Pan African movement. He returned to London where he teamed up with the two primary founders of the Pan African Association. These were Alice Alexander Kinloch, from Kimberley in South Africa, and Advocate Henry Sylvester Williams from Trinidad and Tobago in the Caribbean. Alice was a Camissa African who in 1911 would be formally classified as ‘Coloured’. She can rightly be called the founding mother of Pan African organisation at a global level.

Advocate Henry Sylvester Williams moved to Cape Town where he was the first black person admitted to the Bar for some years. In 1900, the first Pan African Conference was held in London attended by delegates from Britain, Africa, the Caribbean and the United States of America, uniting the African continent with the African diaspora. Francis Peregrino also relocated permanently from New York to Cape Town after the conference in London. His mission was to start a newspaper for black readership.

Williams was commissioned by the Pan African Association to go to the Cape to assist in the founding of a local Pan African movement to foster pride as Africans. To support himself he set up legal practice in Cape Town.

Peregrino immediately jumped into action and founded quite a few organisations. The Pan-African society, followed by the Coloured Men’s Protectorate and Political Association, and the Coloured People’s Vigilance Society. As a member of the USA-based African Methodist Episcopal Church his efforts dovetailed with those of the church. Advocate Henry Sylvester Williams led the formation of the African Political Organisation in 1902, later called the African People’s Organisation, which left Peregrino behind. Peregrino’s ideas were not quite in tune with that of the Pan African movement nor with the thinking of the politically conscious within the community. He was perceived as promoting a Black British mentality in which white values and civilization was seen as the goal.

Frances Peregrino is better remembered for establishing the first Cape Town newspaper orientated towards black readership, called “The South African Spectator.” This fortnightly newspaper was first published on 1 December 1900, the day commemorating Emancipation from Slavery in the Cape Colony. Together with John Tobin, Peregrino also established the “Stone Meetings,” a type of ‘Speaker’s Corner’ at the top of Stone Street in District Six held on Sundays. For many years the Stone Meetings were an important institution in the political life of District Six. Francis Zacharius Santiago Peregrino died on 19 November 1919 in Cape Town.