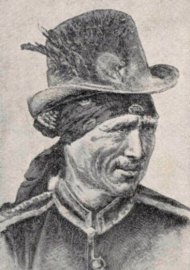 The fortunes of the Barends family and Kok family is closely bound in history. The son of Adam Kok I, Cornelius Kok I, married a fellow Bergenaar Baster, Jan Pienaar’s daughter, and Adam Kok’s daughter married Klaas Barends of the Griguriqua. This would be the beginning of a complex dynasty. At this time, European farmers referred to them collectively as “Bastjaars en Oorlamse Hottentotte.” Missionaries recorded the descendent community in 1813 as made up of 215 Orlam Basters, 180 Koranas and 30 Bushmen, all of whom spoke Dutch, Tswana and Kora.

Cornelius Kok I (1748 – 1822), Nicolas ‘Klaas’ Barends aka ǀGaruxameb, his older brother Piet Barends, Jan Pienaar, Klaas Afrikander and Cupido Roggeveldt were contemporaries and the initiators of the various Orlam Bergenaar Baster factions of the 18th century. Another of the Orlam groups was started and presided over by a German deserter from the VOC by the name of Jan Bloem, whose followers and were called Springbok Orlam Basters.

By the 1770s, Nicolas ‘Klaas’ Barends (born circa 1752), together with Cornelius Kok I, had acted as a guide to Namaqualand for such different characters as the Dutch farmer Jacobus Coetzee, Hendrik Jacob Wikar (a Swedish deserter from the VOC) and the famous Colonel Robert Gordon, the commander of the Cape garrison in 1785. By 1778, Klaas had established a farm at Kakais on the Kai !Gariep River.  His son Barend Barends was born around 1777 and died in 1839. He was baptised at the age of 30 in 1807 and maintained strategic alliances with the missionaries.

Barend Barends became a strong ally of Cornelius Kok I (1746 - 1822) and his sons Cornelius Kok II and Adam Kok II. Around 1804, the London Missionary Society (LMS), persuaded the elderly Cornelius Kok I, as well as Barend Barends, to settle with their people in the area around a spring called Klaarwater just north of the Kai !Gariep River. Then in 1813, a visiting LMS missionary, the Rev. John Campbell, counselled Barends and Kok to stop calling themselves by the derogatory name ‘Basters’ (Bastards) and thus they changed their name to Griqua (after the Griguriqua or ≠Karixurikwa, Cornelius Kok’s mother’s people and Klaas Barends people).

They changed the name of their town from Klaarwater to Griquatown or Griquastad. Cornelius Kok I handed over his leadership to his eldest son Adam Kok II (1771-1835) in 1816 but this was unsuccessful leading to Cornelius Kok II (1778 – 1828) becoming the leader, followed by Adam Kok II upon Cornelius’s death in 1828. Various conflicts and extensive missionary manipulation led to the branches of Kok and Barends families moving apart over time and a loosening of the grip that the Kok’s had over Griquastad.

Initially Cornelius Kok I and Adam Kok II had moved East to Campbell (originally Knovelvallei and then Groote Fontein). Adam Kok III (1811 – 1875) succeeded Adam Kok II in 1835 as East Griqualand Kapteijn and after some years of pressure by the British and then the trekker Boers, Adam Kok III was forced to lead the exodus to southern Natal where a new capital was established at Kokstad.

When a schism emerged among the Griqua, Barend Barends also separated from Griquastad and moved first to Danielskuil (Barendskraal) and later to Boetsap where he engaged in cattle ranching and raiding, and opening trading of goods from the colony with the southern Tswana. Ivory trading was also a big part of their business. The Barends-Griqua focused on the Batswana, BaSotho, Nama and Hill Damara from this point on, and the Barends name slipped into the footnotes of history until a major incident in 1831.

Mzilikazi’s Matebele were set on overcoming the BaSotho and Batswana with whom the Barends-Griqua’s trade and fortunes were enmeshed. Over-confident perhaps from victories in earlier years, Barends and his leading commanders, thinking that they had accomplished another victory and focused on the spoils of war and celebrations, made some major miscalculations, and dropped their guard, in the face of a trap laid for them by their opponents in the Magaliesberg. The Barends-Griqua forces were massacred in their camp at a place still known today as Moordkop, (or Murder Hill).

Andries Waterboer, a relative outsider of San origins, raised by missionaries who continued to have a strong influence over him, orientated him to farming crops. With their support, he rose to become the leader at Griquastad of those who would form West Griqualand after leading his forces in an armed overthrow of the Koks and Barends in what was called the Hartenaaropstand. He would later be succeeded by his son Nicoolas Waterboer as Kaptijn of the West Griqua. The Griqua split into three different trajectories from this point on, as well as into a number of other small splinter communities.

In 1824, Adam Kok II moved away from Campbell and roamed around until he settled in Philippolis in 1825. Cornelius Kok II remained the captain of Campbell from 1825 until his death in 1828. It was between 1810 and 1825 that the Griqua, while maintaining commando-like cavalry and operations, and engaging in both herding and cattle raiding, began to adopt new economic activities such as trading with the Tswana and Sotho and raising agricultural crops. In these activities, Barend Barends and the Barends-Griqua were pioneers.

The role of Barend Barends as one of the key founders of the Griqua is noted in mid-1823 and then the records are relatively quiet about him until a decade later in 1831. The June 1823 incident was when Cornelius Kok II, Adam Kok II, Andries Waterboer and Barend Barends led 200 Griqua cavalry to go to the assistance of the Batlhaping in the Battle of Dithakong when the Batlhaping were under siege by the Manthatisi. In a seven-hour fight alongside the Batlhaping, the Griqua defeated the Manthatisi.

Barend Barends died in 1839 at a mission station near present day Mogwase.

The Real History of the Khoe in South Africa
An overview of the African Indigenous Survivors, The KhoeKhoe Saga series.
A documentary journey of discovery where new facts are uncovered about the real history of the Khoe and their leader Adam Kok in Southern Africa. More than three hundred years later and the Khoi are still facing new challenges.
[06:15] On Set Film Productions/Rudolf Rieger
Tributary 5: Maroons, Orlam & Drosters
Select one of the people of Tributary 5 to read more about them.