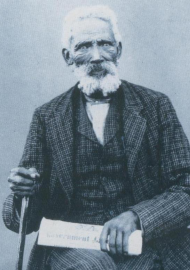 NICOLAAS WATERBOER, the 2nd Kaptijn of the West Griqua, was the son of Andries Waterboer, the first leader of the Griqua of West Griqualand. Andries Waterboer was thought to be from one of the Kai !Gariep clans of San people that had escaped being hunted down by Nama, Orlam, Korana and Bergenaar Baster groups who considered the San people to be stock thieves. Andries was taken in by the missionaries and this is how he entered the Khoe-dominated multi-ethnic Bergenaar Basters led by the Koks and Barends dynasties and became part of the new Griqua polity. Andries Waterboer was his adopted name in an arena where identity was fluid. Through the missionaries he learnt to read and write, and was a master orator.

Fiercely ambitious, he rapidly rose in rank, eventually leading his followers in an armed revolt known as the "Hartenaaropstand" against the rule of Adam Kok II and Barend Barends in 1815. Within a year he had succeeded in defeating both leaders who then migrated with their people towards the south-east. In 1820 he became Kaptijn of the remaining Griquas in further fierce leadership struggles in a highly factionalised Griqua community. He mastered brinjkmanship and strategically created four relatively autonomous sub-territories but ruled Grikwastad tightly as a capital.

In 1834, he was the first neighbouring state that the Cape Colony to conclude a formal treaty with the British. He was invited to Cape Town for the signing of the treaty, which stipulated that, in exchange for payment in money and weaponry, Waterboer would ensure peaceful relations among neighbouring states and that the Cape's border would be secured.

On his death in December 1852, Andries was succeeded by his eldest son Nicolaas Waterboer who became the new Kaptijn of Grikwastad. Nicoolas ruled during the tumultuous era that followed the discovery of diamonds on his land in the 1860s. In a mad diamond rush, “diggers” from across the globe invaded his land. The resulting population explosion and proliferation of “diamond fields” caused tensions to grow between the different groups, including the Griquas, Tswana, Sothos, Orlam, Boers and English diggers. Disagreements ensued over the borders of the semi-nomadic Griquas' land and a range of regional states, including the Transvaal Republic and the Orange Free State, vied for ownership of the land.

Against the backdrop of the land tensions, the diggers, led by the eccentric Stafford Parker, proclaimed the independent "Diggers/Klipdrift Republic" in 1870, but it was swiftly annexed to the British Empire as the separate colony of Griqualand West. After briefly moving to Griqualand East, Waterboer moved back to his official residence in Griquastad in 1874 to reassume his traditional Kaptijnship.

Waterboer used an agent, David Arnot, to launch a lawsuit over his land rights, having lost significant portions of his territory. The lawsuit was successful. Waterboer was a famously eloquent orator, and enormously persuasive in his speech. He was fluent in English and Dutch, as well as the native languages of his people - Afrikaans and Griqua.

In 1878 he briefly led a revolt against the British Empire, which led to his arrest and brief exile to Hopetown. He returned in 1880 but his era of power and independence had faded. Nicoolas Waterboer died in Griekwastad on 17 September 1896.

All these pictures are of the actual personalities, except for Bessie Gquma which is simply an imagined likeness.