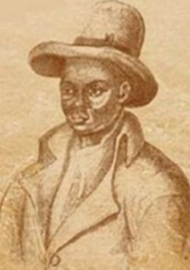 JAGER AFRIKANER or ǀHomǀaramab, who was baptised Christian Afrikaner in later life, was the son of Klaas Afrikaner, whose father was Oude Ram Afrikaner, born circa 1690, of the Roode Zand (Tulbagh). He was a man of mixed Cochoqua Khoe and African-Asian enslaved ancestry. This family were the founders of the first polity and people to call themselves Africans in South Africa.

Oude Ram had two sons – Klaas Afrikaner and Afrikaner Afrikaner (aka Afrikaner Hottentot). The latter was sentenced to life imprisonment on Robben Island where he died. Klaas and Jager were to make the Orlam Afrikaners the most talked about and daring band of people, feared by all, including the Boers and British. Klaas and his sons initially worked with a European farmer, Petrus Pienaar, and engaged with him in cattle rustling trips to the interior of the country. They lived on Pienaar’s farm in the Hantam area in 1790. By 1795 Jager had succeeded his father as Kaptijn of their Orlam group after he had passed. Tensions arose between the Orlam and Pienaar from 1793 onwards, and finally Jager caught Pienaar molesting their wives. The incensed Jager Afrikaner who killed Pienaar in March 1796.

Following the attack on the Pienaars, the Orlams crossed the Kai !Gariep and settled around Blydeverwacht in today’s Namibia. At some point between 1796 and the turn of the century, Klaas Afrikaner and his followers established ǁKhauxa!nas to the east of the Great Karas Mountains. This was a rear base hidden retreat and "impregnable fortification" against possible attempts at pursuit by the Cape authorities. Within this entrenchment, at the top of the mountain, they built their houses, and had kraals for their calves.

After the Orlams' escape from the Cape, several official commando expeditions were sent after them, but none of them succeeded. The announcement that all Nama in the Cape would have to undergo a census led to a revolt because they feared taxation and worst still death. This increased Jager Afrikaner’s following. It also increased the frequency of his raids on Nama, other Orlam groups, Korana, Griqua and missionary groups. However, his main trade was ivory and it was in this trade that trouble struck when a crooked middleman was found out to be stealing from him. This all led to a showdown in the form of the Warmbad raid which ultimately proved to have crossed a line beyond that which others were willing to be pushed.

The trickster was a man by the name of Seidenfaden who acted as the middleman between the Orlams and the Cape commercial centres. As an outlaw, it was impossible for Jager to trade directly with the government, thus necessitating a middleman. Seidenfaden misused the position to his advantage in a deal where the considerable amount of 4000 Rijksdaler (Rix dollars) was at stake. This provoked Jager into retaliation, raiding first the London Missionary Society’s premises at Pella in the Cape, which was Seidenfaden's station base, and then Warmbad. Around this timer Jager Afrikaner’s  power was seriously reduced by a raiding alliance of Danster’s Orlam Xhosa, Griqua, Nama and Korana, and Jager Afrikaner was forced to wind down his previous life as a warrior brigand.

He had to mend his broken bridges with the missionaries and understood that he would be a huge prize for them if they could convert him. Jager also knew that such conversion would result in political expedience and heal the rift with him and the British authorities and get him off the wanted list. He was shrewd enough to use the missionaries as his shield and was baptised as Christian Afrikaner by the London Missionary Society’s missionary Johann Leonhard Ebner in 1815. In 1819 Jager (Christian) Afrikaner accompanied Robert Moffat, who took over as missionary from Ebner, to Cape Town, where he received an ox-wagon from the governor, Lord Charles Somerset. This was in effect a form of peace treaty between the Orlams and the colonial government so that after 1819 there was no longer any need for the establishment of a fortified retreat such as ǁKhauxa!nas. Jager Afrikaner died in 1823 in Blydeverwacht. Jonker Afrikaner and Jager’s other sons moved north and established themselves in the border region between Great Namaqualand and old Damaraland. Later, during the early 1840s, Jonker Afrikaner founded Windhoek, which could be seen as a successor to ǁKhauxa!nas.