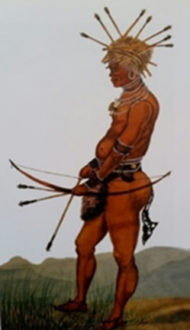 KOERIKEI was a skillful military resistance leader of the ǀXam people (Cape San) in the Sneeuberg Mountains who had accomplished a fairly successful 30-year armed resistance to trek-Boers trying to settle in their territory and against the General Commando which committed many acts of genocide on the ǀXam Koerikei’s name means ‘Bullet Dodger’.

Dutch soldier, Robert Gordon, a, recorded in his journal an exchange between Koerikei and Veldwagtmeester van der Merwe, which took place by shouting from the top of a cliff and below. Koerikei shouted “What are you doing in my territory? You take all the places where the eland and the other game are. Why did you not stay where the sun goes down, where you were first?” Van der Merwe responded “Why do you not live in peace as before. Why do you not go hunting with us and live with us. And why do you not have enough country as it is?”  Koerikei replied “I don’t want to leave my country of birth and I will kill your herdsmen and chase them all away. You will see who will win.”

It was not an idle threat. For almost 30 years, from 1770 to 1799, Koerikei led four offensive wars against the ǀXam people. Though losing men, women and children in genocidal proportions, they successfully defended their territory, expelling settlers and kept them and the Commandos at bay. It exasperated the Europeans and ultimately they caved in and sought peace with the San.

The Cape San had hitherto avoided peace treaties because they saw how the peace treaties signed by Khoe were ignored. The peace signed was the first treaty that agreed that they could hold the territory defended. Needless to say, the Europeans did not honour this peace. The Dutch were simply buying time. Not all the ǀXam gave up the fight which continued in some areas well into the 19th century.