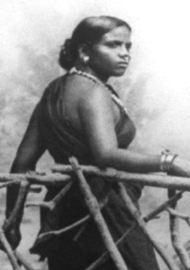 In 1656 Groote Catrijn was condemned to death – to be tied to a stake and garroted until dead, for the murder of her former lover, Claes van Malabar. She was pardoned by the Governor-General of Batavia who commuted her sentence to life banishment to the Cape of Good Hope. It was found that her killing of Claes was committed in self-defense. They were both involved in a physical struggle during which Claes sexually assaulted Catrijn. She had been thrown to the ground, when Catrijn fearing that she would be killed, grabbed a hay ladder, and hit Claes violently in his lower stomach. He died four days later as a result of this injury. Catrijn was thus banished to the Cape, to serve her life sentence as a Company slave.

Arriving in the Cape in 1657, Groote Catrijn worked as a washerwoman at the Fort de Goede Hoop for Jan van Riebeek. At that time there were only 14 other women (whether freed or enslaved) living at the small Cape settlement where there were 90 European men. Catrijn became involved in relationships with freed men (formerly enslaved), and with European VOC officials. In these early years she mothered 4 children.

A notable relationship was with a VOC soldier, Hans Christoffel Snijder, from Heidelberg, Germany who was renamed ‘Snijman’ at the Cape. Hans Snijman was actually convicted for deserting his post guard at the fort “to sleep at the living place of a certain well known black servant girl.” For this he was sentenced to physical punishment and to live on Robben Island for two years, and to forfeit two-months’ salary. In 1669, Groote Catrijn bore Hans Snijman a son who was named and baptized,  Christoffel. Christoffel Snijman became the second owner of Zandvliet farm, now Solms Delta. By the 1690s, Christoffel was married to Marguerite Therese de Savoye, the daughter of the eminent French Huguenot, Jacques de Savoye.

In 1671, Catrijn married Anthonij Jansz van Bengale, a Free Black registered landowner at the Cape of Good Hope. She had become a free woman when she was pardoned by the authorities so that she could marry Anthonij. Around 1683, Catrijn, Athonij and their family suffered a tragedy in which the entire family died except for Christoffel. Christoffel went into the care of his godmother, Maai Angela van Bengal and her husband Arnoldus Willemsz Basson, who owned the properties Eensaamheid and Meererust across the river from Zandvliet. The marriage of Groote Catrijn’s son was the first recorded marriage of a locally born black man to a European woman.