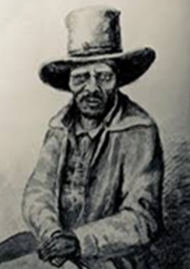 By the end of the 18th century the Kai !Gariep became a refuge for all manner of people: San, Korana, Bergenaar Basters, Orlam and Xhosa rebels, as well as traders, deserters and criminals.

When Ngqika overthrew and captured his uncle Ndlambe, one of the latter’s brothers, NZWANE, also known as Danster, escaped from Ngqika with a few followers and moved to the Kai !Gariep territory. Unable to subsist initially, most of them moved south and entered service in the Colony. Nzwane worked for Floris Visser, a veldwachtmeester in the Roggeveld with whom he had frequent, angry clashes.

Nevertheless he learned to speak Dutch, and this is when he took the name Danster, though he was also known as Nozi and Zonie.

Importantly, guns were available, and as each Xhosa man acquired the arms and ammunition necessary for independent life, he slipped away, back to the Kai !Gariep river. There, by 1800, Danster had assembled a considerable force which focused on control over the ivory and cattle trade. Danster struck a deal with Jager Afrikaner to control this trade, but Jager double-crossed him, kidnapped  Danster's wife and children, stole his cattle and murdered his followers.

The immediate repercussions of the feud with Jager Afrikaner was that Danster’s following was greatly diminished, he had no cattle and had lost most of his raiding power in terms of horses and guns. He was forced to retreat upriver and had to forge new alliances with other Xhosa on the fringe such as the imiDange, under the leadership of Olela who refused to become subordinate to the Xhosa chief Rharhabe in 1783. Olela, his brother, Gola, and scattered remnants of the clan had moved north to the Kai ! Gariep’s upper reaches and this is where Danster found them.

By 1802, Danster was able to muster a combined Xhosa, Nama, Griqua and Korana force and they attacked Jager and his force successfully and broke his previously unchallenged supremacy in the region. The attack on Jager Afrikaner resulted in Danster getting enough guns, ammunition and horses to extend these Orlam Xhosa’s raiding and trading activities further north, where they attacked the Tlhaping in 1805. This put them on a collision course with the Griqua who held the monopoly of trade with the Tlhaping.  Danster knew that he did not stand a chance against the Griqua so he moved on, forming alliances over the next ten years with a number of new groups that operated in Cape’s northern and western extremities.

Danster and his party were caught within the colonial boundaries in early 1811, accused of cattle theft, and transported aboard the ship Young Phoenix to Algoa Bay. From there they were to be returned to Ngqika under heavy guard. Danster and most of his fellow prisoners escaped en-route, and Ngqika refused to take responsibility for the other prisoners denying that these were his people.

In November 1812, Danster believed he had enough strength to tackle the Griqua and Korana – it turned iout to be a big mistake. He was defeated with great losses and retreated to the Zak River to recuperate and to ally with the Hartenaars in the 1814-1815 rebellion against established Griqua authority. Regardless of many setbacks, Danster was always tenacious and strategic. By 1819 he had a thoroughly mixed following of Drosters including many Boers, and had made the upper Zak River his stronghold.

There is a story, told by Nehemiah Moshesh, that Danster was finally caught by the British in 1828 and sent to Robben Island. He managed to escape in a boat, and though his companion drowned, Danster returned to his old haunts in 1830 or 1831. Extremely wary of recapture, he gathered his followers and trekked with them to Moshesh in Basutoland, where, in exchange for arms, he was allowed to settle at Danster's Nek, opposite Herschel, between Rouxville and Zastron, in 1834. From Basutholand (today Lesotho), Danster continued his exploits for many years and left an indelible mark on the region. He was the father of the mixed Xhosa, European rebel, Griqua, Korana, and Nama Orlam Xhosa of the Northern Cape.