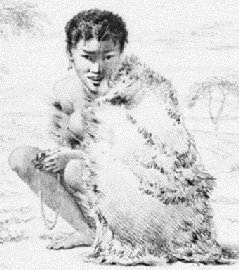 T'Kaness, daughter of T'Goosht Kaba, a Korana Gaob. The Korana descend directly from the Cape Peninsula Gora Khoe refuges of the 17th century, namely Krotoa’s people. As there are no sketches of Krotoa we can only go by the descriptions of her by different diarists who met her, and by this descendent sketch. It fits with the descriptions given of Krotoa. It was drawn by Samuel Daniell (1775-1811).

KROTOA (!goa/gõas – a girl in the care of others) of the ‖Ammaqua, the niece of Autshumao, was 10 years old when Jan van Riebeeck’s wife took her into her service as a handmaid. She had already learnt much about the Europeans and their languages at her uncle Autshumao’s side, and as a servant in van Riebeeck’s household she was able to become proficient in the Dutch language, trading, customs and religion. By the age of 15 van Riebeeck began to use her as an interpreter and emissary, and over the next 5 years she excelled in this work even though young and by then, a mother of two.

Jan van Riebeeck, who had taken Krotoa from her community, first wrote glowingly about her service but later came to distrust her and expressed that she was simply telling the Dutch what they wanted to hear. He hinted that indeed she may well have been favouring her sister’s people, the Cochoqua, her uncle and the ‖Ammaqua.

Krotoa stands out as young woman who held her own in a man’s world, doing work that no European woman did at that time. She was an accomplished linguist, a diplomat and emissary. She is mentioned over 155 times in the van Riebeeck’s journal and it is clear that much of what is written in the journal on indigenous people we owe to the work and voice of Kratoa.

Pre-empting the new difficulties she would face on van Riebeeck’s departure and for her own protection, she had herself baptised and married Pieter (Havgardt) van Meerhof, becoming the first indigene Christian and the first to marry a European.

Her husband was killed on an expedition to Madagascar. The last years of her life were spent in conflict with the Dutch authorities who had marginalised and ostracised her. An alcohol dependency was established in her youth with the van Riebeeck’s and Dutch officials at the fort, where a girl child servant was open to abuse, and it dominated her adult life. Krotoa only lived for three decades – the first in the care of her uncle as a carefree child; the second under the control of Jan van Riebeeck where she worked as an interpreter between the Dutch and her people; and the third, first under the control of he husband and, after he died, controlled by the council of policy which greatly limited her freedom of movement.

Her children were taken from her and she spent her last days a virtual prisoner on Robben Island. Krotoa died in 1674 and her children were sent to Mauritius. Through her daughter, Petronella, who married Daniel Zaaiman and returned to the Cape with their children, Krotoa’s lineage can be tracked to the present in South Africa and in Indonesia.

Krotoa - Khoi Child
A Hidden Histories documentary produced for SABC 1.
Krotoa was 10 years old when Jan van Riebeeck’s wife took her into her service as a handmaid. She stands out as young woman who held her own in a man’s world.
[47:48] Penguin Films/SABC 1
Tributary 1: Cape Indigenous Africans
Select one of the people of Tributary 1 to read more about them.