‖KABBO, DIA!KWAIN and !KWEITEN TA ‖KEN - were three important San voices of a bigger group of Cape San people who left us a magnificent legacy gift of art, writing and other cultural resources. 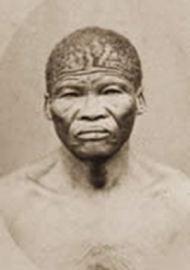 ‖Kabbo (Dreamer) was from a ǀXam clan, the Ss’wa ka !kui (Plains People) at Bitterpits near the Strondbergen and had been incarcerated at the Breakwater Convict Station at the Waterfront after being found guilty in a case of stock theft. He was prisoner number 4628.

Dia!kwain (aka David Hoesar) of the ǀXam clan known as the !nussa !e’: (Grass People) lived at the Katkop mountains north of Calvinia. He was incarcerated at the Breakwater Convict Station at the Waterfront after being found guilty in a culpable homicide case where it was accepted that he acted in self-defense when a farmer, who threatened his family, was shot. He was prisoner number 4434. 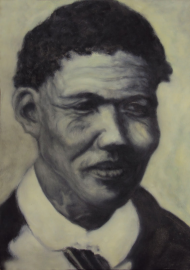 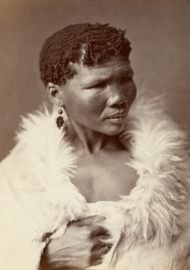 !Kweiten ta ‖ken (aka Rachel) was from a ǀXam clan known as the !nussa !e’: (Grass People) lived at the Katkop mountains north of Calvinia. She was Dia!kwain’s sister who was married to ≠Kasin who had been sentenced along with Dia!kwain. She and her four children came to join Dia!kwain and ≠Kasin after Bleeck and Lloyd had attained the agreement of the prison authorities in 1874 for a group of Cape San prisoners be allowed to carry out the rest of their sentence in their custody in Mowbray.

This is how ‖Kabbo, Dia!kwain and !Kweiten ta ‖ken got to work with the Bleek and Lloyd sisters. With ‖Kabbo as their primary source for language and cultural heritage, Wilhelm Bleek, a German anthropological linguistics academic (the father of ‘race-classification’), his wife Jemima Lloyd, and her sister Lucy Lloyd, a teacher, worked with 17 Cape San of the ǀXam and !Kun people to compile and document the most comprehensive collection of words, phrases, stories, narratives about their lives, photographs as well as history, folklore, beliefs and customs. They had also dressed some of the San people in European clothes for photo shoots. Some of the ǀXam and !Kun prisoners were allowed to stay at the Bleek-Lloyd home while others were interviewed at their places of incarceration at Robben Island or Breakwater Prisons.  By the time of the 1904 Census of the Cape Colony, only 4 168 San (recorded as Bushmen) were to be counted in the Cape. Such was the effects of genocide.

CREDIT: The full story of this group of Cape San people and their stories, art, photos and language research can be found in UCT’s African Studies Library, and Llarec – the Lucy Lloyd Archive, Resource and Exhibition Centre which is part of the Centre for Curating the Archive – a University of Cape Town research centre directed by Pippa Skotnes and located at Michaelis School of Fine Art. This amazing full digital collection can be viewed at - http://lloydbleekcollection.cs.uct.ac.za/
Tributary 1: Cape Indigenous Africans
Select one of the people of Tributary 1 to read more about them.