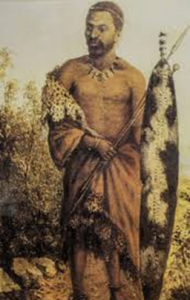 MAKHANDA’s father originated from the amaXhosa and his mother, who raised him, was Gonaqua Khoe among the Gqunukwebe. In adulthood he was married to the sister of a Gonaqua Bi’a, Hans Trompetter. Guided by his mother, Makhanda was raised in the spiritual culture of the San and Khoe, and he also came under some influence of the liberation theology of Rev Johannes van der Kemp who was an anti-slavery campaigner and a campaigner against abuse of Khoe on farms. The non-conformist Kemp also married into the Gonaqua Khoe and the fact that he had been a soldier in Europe before his calling to religious service influenced Makhanda who developed his own mix of traditional faith, the Christian faith and a military calling.

The Europeans saw Makhanda’s faith as heresy but the Rharhabe leadership and people were captivated by Makhanda’s oratory. He was a tall, handsome man who appears to have been the Nelson Mandela of his day, and soon he rose to become an Itola or war doctor among the Xhosa forces. Though rubbishing his spiritual oratory, the British regarded him with awe and as a formidable foe. His leadership in war was skillful. He and his Khoe allies led their men from the front and reverted to guerrilla warfare after losing the Grahamstown battle, only because the British got a lucky break when rescued from defeat by a notable collaborator Khoe leader, Boezak and his commando, which had been on a hunting expedition nearby.

Makhanda was never captured since he was protected by the common people everywhere that he went. The British spread the story that there was no animosity between them and the Xhosa and that Makhanda was the source of the conflict. So Makhanda handed himself over to the British to demonstrate that resistance from the African people would continue because of the theft of land by the British and the rejection of their subjugation by the British.

After being imprisoned on Robben Island along with his brother-in-law Hans Trompetter and his right-hand Khoe resister Kai Bi’a (or Gaob) David Stuurman, he and 30 other rebel prisoners escaped from Robben Island prison in 1820 following an armed uprising. The escape boat that carried Makhanda capsized in the waves just off Bloubergstrand. It is said that he clung to a rock until dragged under water, shouting encouragement to the other escapees that they should swim to freedom.