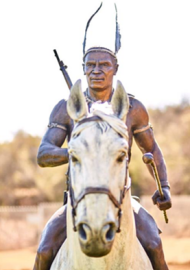 Maqoma was an active opponent of his father who had ceded the land between the Cummisa (Fish) and Keiskamma Rivers to the British. Maqoma developed an alliance with the Khoe and freed slaves under the rebel leadership of Herman Ngxukumeshe Matroos in the Kat River Settlement in 1822 as this area had been his and his brother, Tyali’s place of residence.

Maqoma was an eloquent, remarkable and wise political and military leader whose leadership spanned 40 years and who was active in three Xhosa wars of resistance as the guiding hand and as leader who led from the front. His antagonism to the British military and to colonialism emerged when his father had collaborated with the colonial authorities and had ceded Xhosa land to the colony.

Maqoma led the amaXhosa in three consecutive wars of resistance in 1834, 1846 and 1850 as he passionately opposed the dispossession of his people’s land and their exploitation by an alliance of the British military and British merchants. The last was the most bitterly fought war over the previous 40 years. It was also the 18th war of resistance by indigenous Africans since the first Dutch Khoe-War in 1659. In the war that lasted from 1850 to 1853, the Khoe of the Blinkwater River Valley and Kat River Settlement revolted, under the leadership of a mixed Khoe-Slave-Xhosa leader by the name of Hermanus Ngxukumeshe Matroos. Though the war ended in defeat in 1853, for 18 months the combined forces of Maqoma and Khoe leader Hans Branders pinned back the British in the Waterkloof forests and scored heavy defeats against them.

Maqoma was imprisoned on Robben Island for 12 years and only paroled in 1869. Upon leaving the prison he immediately went to lay claim to his confiscated land.  As a result, he was again arrested and returned to Robben Island where he died in 1873 under suspicious circumstances. His Khoe wife, Katje, is standing next to Maqoma in the photo.