The Cornerstones of the Peopling of South Africa

The Peopling of South Africa is largely made up of four cornerstones – the San, Khoe, Kalanga and later migratory drifts from West, Central and East Africa. The first three can be called Foundation Peoples who came together during the period 200 BCE – 300 CE in the Sashe-Limpopo region. They were joined by others from different parts of Africa in gradual migratory drifts over the next 1000 years. 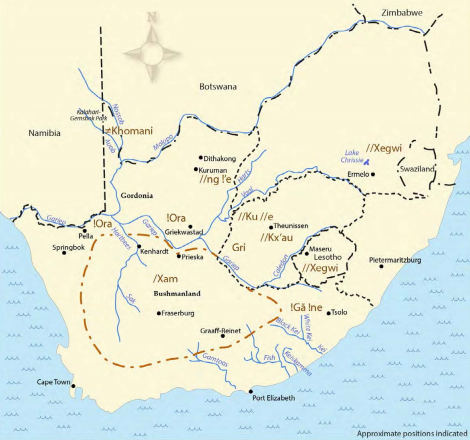 Distribution of !Xam and some other San language groups in the 19th century.
Map by Anthony Traill 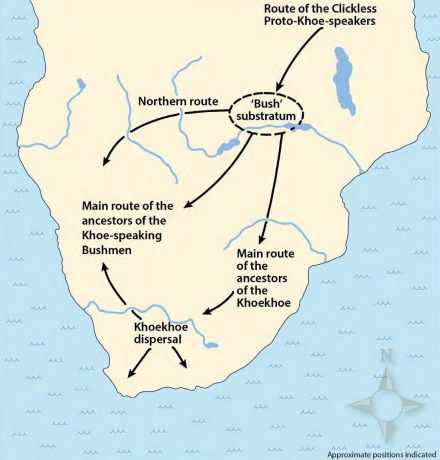 Probable migration routes of Khoe-speakers based on linguistic evidence.
Map by Richard Elphick

The San footprint extends from Tanzania, Congo, Zambia and Angola, down through Namibia, Botswana, Zimbabwe, Mozambique and across South Africa. The evolution towards emerging as the San can be traced back 40 000 years and over the last 12 000 years their forebears continued to move around to various locations in circular migrations as climatic changes created flood plains, high sea levels, and low sea levels and desertification at different times. From around 3000 years ago to the present the migratory drifts of herders and then farmers, that also occurred in a huge circular arc penetrated into their home territories and    disrupted their way of living. As a result some engaged in herding and farming, and integrated with the herders and farmers, while others maintained a purely hunter-gatherer existence and were gradually forced to retreat to more inhospitable areas by herders and farmers. Today their numbers are around 100 000 people spread over six countries, and in South Africa they number around 7 500. 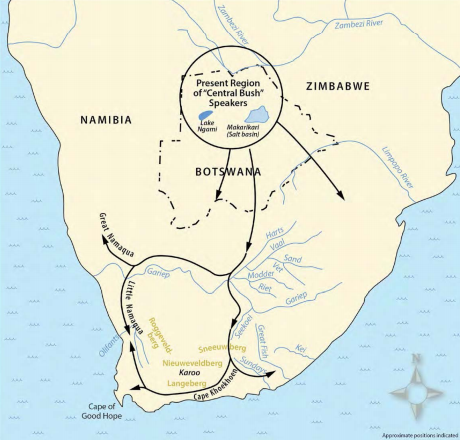 The Khoe footprint falls into two categories and has spread north into Zimbabwe, West to Namibia, east right across the KZN, down South via the Kai !Gariep territories down into the Eastern and Western Capes. In the Eastern Cape most, not all, were assimilated into the Xhosa, just like those Khoe who went North and East, While in Namibia, Kai !Gariep and the Western Cape the Khoe remained distinct identities. Around 200 years ago as a result of colonialism many of the Western Cape Khoe fled as refugees and rebels from the territories taken over by the European colonists, an created revived societies such as the Korana, Griqua, Witboois, and Orlam Afrikaners. The Western Khoe of Namibia and the Northern Cape known as the Nama survived in tact as a society regardless of attacks by European colonists of the Cape, British soldiers and war and genocide at the hands of the Germans. The Nama also absorbed large numbers of Cape Khoe refugees. Today the Cape Khoe and the Korana, Griqua and Nama are likely to collectively number around 1,1 million people, if one notes that there were over 92 000 in the last census to count them separately from others with whom they were assimilated under the label ‘Coloured’.

Within 200 years of the first emergence of Khoe people, from around 100 BCE - 100 CE small scale migratory drifts of farmer peoples arrived just like the ancestors of the Khoe into the Sashe-Limpopo River confluence area and spread along both sides of the Limpopo River. Like the ancestors of the Khoe they came from East Africa (Kwale culture), but also from the great lakes and central Africa (Nkope culture) and from West Africa via Angola (Kalundu culture). In southwestern Zimbabwe, Northern Botswana and Limpopo province South Africa these farmers with iron-smelting skills, mixed with the Khwe, and Tshua San and with the emergent Khoe people. Out of this mingling new South African communities evolved into a South African foundation people, just like the Khoe had done shortly before them. Archaeologists have tracked various stages in the evolution of these multi-ethnic societies by studying the sites where they lived – Bambata, Ziwa, Zhizo, and at the highest stage of this development they became the Kalanga who established the first South African city-state or kingdom – Mapungubwe.

The archaeology of the Bambata cultures provide the first signs that somewhere between 100 BCE and 100 CE that there were sub-Saharan African influences associated with Bantu-speaking people in the Sashe-Limpopo region; then by 350 CE – 500 CE a distinctive Gokomere-Ziwa culture is evidenced as a progression on the early iron-age element of Bambata culture. From this, further local development saw the emergence of Zhizo culture between 600-900 CE. These were multi-ethnic cultures from West, East and central Africa arriving into the region and mixing with Tshua and Khwe hunter-gatherers and the emergent Khoe herders. These new societies were a mix of hunter-gatherer, herder and farmer societies that also had characteristics of craft, mining, metallurgy and trading with the Arabia, India, Southeast Asia, and China via interlocuters on the East African coast. This progression between 100 BCE – 900 CE are what were the proto-Kalanga foundation people of Southern Africa. It is the Kalanga who established the first culture of Kingdoms in Southern Africa when they established Mapungubwe.

The Kalanga pastoral kingdoms and influence extended into Botswana and right up to the north-east of Zimbabwe and Mozambique. Great Zimbabwe, Thulamela, Khami, the Butua and Tora dynasties, Mutapa Kingdom and the Rozvi Empire of the MaMbo, and the Tsonga Kingdoms all grew out of the South African kingdom of Mapungubwe. As much as the Tshua and Khwe (San), and the Khoe, were foundation peoples for the peopling of South Africa, so too were the proto-Kalanga. These peoples did not just move north, west and east, but also moved alongside the migrant Khoe south-eastwards and south-westwards. My 650 CE signs of their presence was as far south as East London. The earliest ǁKosa (Xhosa) and Thembu were a mix of the Khoe and these proto-Kalanga. The sacred fish-eagle symbol is one marker that appears all over Southern Africa. The Shona, Karanga,  Ndebele, Tswana, Venda all have Kalanga roots, along with Khoe and San roots, besides the continue slow migratory infusions from later migrants filtering down from northwest, central and northeast Africa.

The Kalanga social revolution reached its pinnacle when the Rozvi Empire of the priestly-kings known as MaMbo expanded their influence, after they arose as a progression from Mapungubwe, Khami, and Mutapa. Under Shaka the legacy of the Rozvi MaMbo both revived and changed to meet new influence. It was European colonial expansionism that drove both Changamire of the Rozvi and Shaka Zulu to reconfigure African societies into strong federations with strong military power.

Mapungubwe - South Africa’s First City
First city in South Africa located in the Limpopo Province.
An educational video made for Grade 6 about Mapungubwe.
[03:02] Teach Ability
The Kingdom Of Mapungubwe
Why the Kingdom of Mapungubwe was so powerful - the secrets of a sacred hill.
Between the years 950 AD to 1290 AD, on the Northern border of South Africa, traversing the conference of the Shashi – Limpopo Valley, which today divides Botswana, Zimbabwe and South Africa, existed an ancient African Kingdom, called Mapungubwe. From the Iron Age to present day this unique one-hour film explores the history and tells the story of this remarkable city. Governed from an impenetrable hilltop, Mapungubwe became the business centre for all of Africa’s trade which, by this period, had become well integrated into the world economy and thrived on trade with the East Indian Trade Route attracting traders from as far afield as Persia, Arabia, India and China. Mapungubwe was inhabited by successive groups of people for this 300 year period until it was mysteriously evacuated. No one knows for sure why, but in 1290 Mapungubwes’ inhabitants left taking with them the memories and stories of Mapungubwes' early history. In this film archaeologists and historians take us on a journey through a thousand years of untold African history revealing the controversial discovery of this ancient site and its golden artifacts.
[50:44] Timeline/Icon Entertainment/TVF International